Ich schmökere zur Zeit in "Dynamic Karate" von Nakayama Sensei und habe dabei viele viele schöne Passagen gefunden. Hier ein paar Zeilen für euch:
"Ｔsuki (punching), uchi (striking), keri (kicking) and uke (blocking) are the fundamental karate techniques. They are at once the beginning and the final goal of karate. Students can easily learn to perform these basics movements in little more than two months, but perfection in their performance may be impossible" 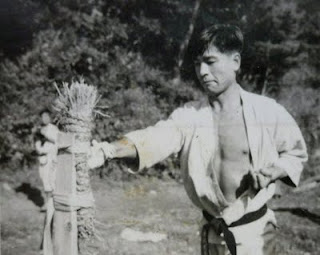 "The kind of movement needed in fundemental karate techniques is not one which will move a heavy object slowly, but one will move a light object with maximum speed. Thus, the strong but slow exercise of power necessary to lift a barbell is not as effective in karate as the power developed by hitting the punching board (makiwara) with great speed"

"Coaches of modern sports constantly stress the role of the hips in furnishing maximum power to any movement. For example, they say "Hit with your hips", or "Throw with your hips", or "Get your hips into it". In Japan the importance of tanden has been taughed from early times. Teachers of the martial arts, and those of other arts and disciplines have constantly emphasized the importance of tanden in achieving competence. The region was emphasized because it was felt that here was centered the human spirit, and that this area is provided the basics of power and balance. (...) If the power concentrated in the tanden is brought into play in executing karate techniques, the pelvic and hip bones will be firmly supported by the thighs, and the trunk by the spine. This interlocking support will produce strong techniques. The center of the body, i.e., the lower abdominal area and the hips, plays a great part in our various movements. Therefore, try to punch with the hips, kick with the hips, and block with the hips."